Pizza, Skyscrapers and a Giant Bean

The many highlights of the Windy City…

I have always presumed Chicago was given its nickname The Windy City for that specific reason (that it had gusts of wind blowing through from Lake Michigan), but during my time here, it was anything but windy. It was the middle of summer but still, I was confused. Turns out, it’s known as this due to its politicians bellowing and being full of “Hot air”. Makes sense I guess.

I had a lot of images in my head of what I imagined Chicago to be like because of people’s views on it and everything I knew about it. When we arrived I was amazed. It was nothing like I expected it to be. I pictured it to be dirty and full of rough people from everything I have heard but it wasn’t like that at all. It was so modern, full of skyscrapers and business people running around just like any normal city, but of course it had the train system running overhead which did make it seem a little dark when you’re walking through the streets. It’s like they wanted to be different and put this into action instead of an underground system but it works just as well. 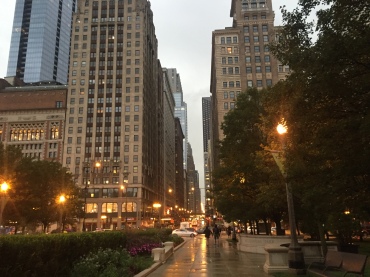 Just like any other city there is the main downtown district where you can find all the major restaurants and shops. We spent rather a lot of time and money here because it is just so easy to get carried away. It felt like being on a larger Oxford Street! One thing I did notice was the entrances to most buildings were revolving doors. I don’t know why I picked up on this but once you notice it you can’t help but see it all the time. For reasons I can’t understand it did amuse me, just seeing people struggle to get into places because of this “in thing”.

One thing Chicago is famous for is its Deep Dish Pizza (or “Pie” as the Americans call them, although they are that deep you could actually call them that) and is something you definitely cannot miss out on! The best place to go for the best pizza pie in the city is Giordano’s who have been serving this great delicacy since 1974. If you’re in town, go and grab a slice (or 5), it won’t disappoint! While we were here we also went to the Cheesecake Factory; this is one restaurant that I was desperate to try out and although they are located all across the US, this is the first one I’d found so the queue out the door didn’t bother me, we were willing to wait for a table and do not regret it one bit! Although the entire meal was 5*, I will never have another piece of cheesecake as good as that ever again!

The cheapest way of travelling in places like this is to avoid the big name hotels and stick to hostels where possible. Although parking was a nightmare, the hostel we stayed at (Hosteling International) was incredible, one of the nicest I’d ever been to. It was made up of many floors, large rooms, a huge kitchen/dining area with free breakfast buffets, a games room, literally everything you could want and it was right in the centre of the city. Perfect! The great thing is, it doesn’t matter your age, nobody cares, you could be 18 or 68, there will be a room for you so don’t worry about fitting in. 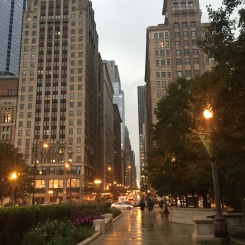 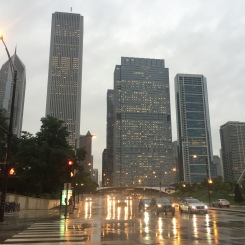 Chicago isn’t known as a place you go to for sightseeing and attractions because they aren’t as well known as places like London or New York, but there is more than what you may think…
One of the big ones that most people associate this place with is ‘The Bean’. Up until I got there this is what I always called it and when you tell people about it they instantly know what you’re talking about, but here’s a fact for you, it’s not actually called that… its real name is ‘Cloud Gate’. I’m not going to lie, ‘The Bean’ sounds more attractive to me. It is based in Millennium Park and is one of the highlights. It is made up of polished stainless steel plates which gives the appearance of liquid mercury. Because it is so reflective, it is the perfect place to get a great image of yourself and the incredible city skyline. 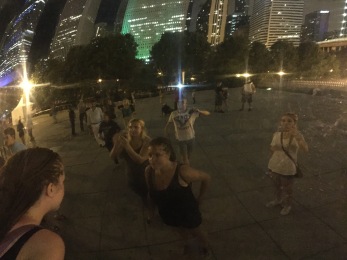 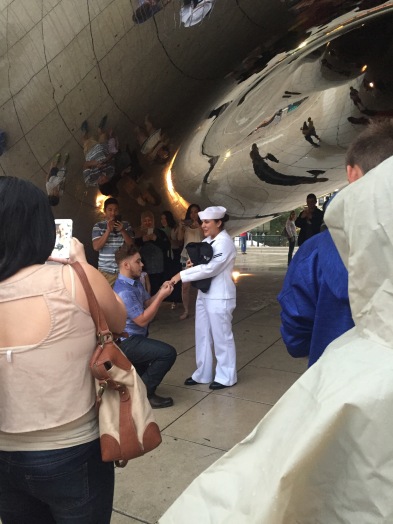 Another must see attraction is the Willis Tower. Built as, and still commonly known as The Sears Tower, it stands tall above every other skyscraper in the city. As one of the tallest buildings in the world and the tallest in America, the 110 story building has made up of Chicago’s skyline since 1974. Although it was originally built for the Sears Company’s Central Office space, it is now open to the public as an attraction, particularly its 103rd floor. Why? Because for anyone who isn’t afraid of heights, this is the perfect spot to set your eyes upon stunning sights of the entire city, across Lake Michigan and spans of up to 4 states! The Skydeck is home to an attraction known as The Ledge… you’ve got to have a real head for heights for this! The Ledge is a glass box that extends out over 4 feet from the Skydeck providing even better, less restrictive views even of the ground below through the glass floor. The photos won’t do it justice, they never do. 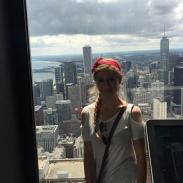 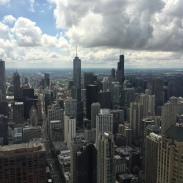 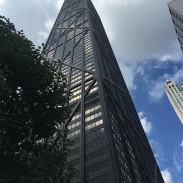 For a great photo opportunity head to Grant Park where you can see the spectacle which is known as Buckingham Fountain; this landmark is one of the largest fountains in the world and was inspired by the Latona Fountain at the Palace of Versailles. It is meant to represent Lake Michigan and has 4 Art Deco style sea horses that represent the 4 states that boarder it. You can see the fountain light up and catch the show every hour from dusk until 10pm from mid April to mid October (weather dependant) and it lasts roughly 20 minutes. Cameras at the ready! 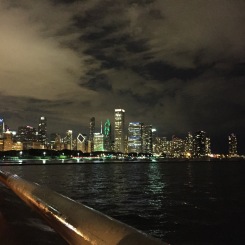 One of the best ways to see all of the key parts of the city is to take a bike tour. These run throughout the day and into the evening. We took the evening trip and it was so good to see the city’s incredible skyline at night. We went through an excursion company called Bobby’s Bike Hike which, despite the name, provides not just bike tours, but also walking tours and food tours. I would recommend the bike tour for a few reasons; the city is flat and filled with paths and cycle ways making it so easy to get around. Plus with a bike you get to go further and of course see more while severely irritating the locals by getting in the way and the continuous bell ringing. The tour we took included Millennium Park, Buckingham Fountain, Grant Park (known as Chicago’s front yard) and the Lakefront Trail to name a few while ending on a high watching the fireworks at Navy Pier. These tours are so cheap costing around $30 for 3 hours with helmet and bike rental included. It’s a crowd pleaser! You get the most incredible opportunities to stop for photos anywhere along the way. Don’t worry, you even get a riding lesson before you start just in case you don’t know how to ride a bike (not that you would be silly enough to take this tour if you didn’t know how to). You also get told all kinds of facts and stories about the city; we learnt about the Congress Hotel and how it became haunted and also got fascinated by a white party we went past that was being held along the water front. I’d never seen anything quite like it! 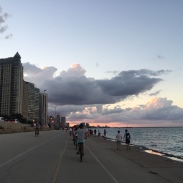 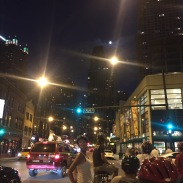 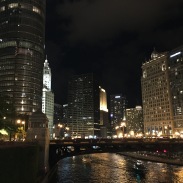 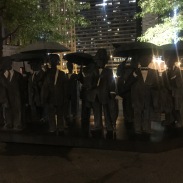 Overall Chicago is an incredible place to visit and you should definitely consider it for your next long weekend. Sorry New York, I think I’ve found your competition!