Canada is one of many countries I have always wanted to visit, maybe it’s just that part of the world in general I have an interest in. My bucket list is pretty long and seeing Niagara Falls was one of the things near the top so I’m so happy I got chance to cross it off, it definitely does not disappoint! I have a habit of doing a lot of things last minute and if you know me you’ll know that I tend to do a lot of things without thinking first and this trip was one of those spare of the moment things, flights were on sale and I just thought what the hell and booked it which didn’t give me a lot of time to prepare but that made it even more exciting! 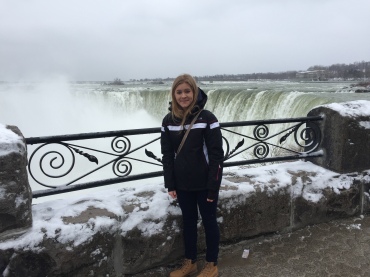 Although you can definitely see why the falls are one of the 7 wonders of the world it is not a place to go for a long period of time especially during the winter months. I stayed for a week but during this time I took a couple of day trips, one to Toronto and one to Buffalo NY. A week was plenty of time to get round and see everything. Keeping on the subject of length of stay, a lot of people said to me before I went “isn’t it such a long way to go for only a week?” Before you go you have to plan ahead and figure out how much time you will need, you want enough time to see everything but not too much time so you get bored. It’s not the travelling you should think about, it’s the amazing experience you will have once you’re there.

The Skylon Tower overlooks the Falls and is open all year round and I would recommend going up to the Observation Deck because it gives you a totally different view from above. Something else that is open all year round is the Journey behind the falls which takes you through the tunnels built behind and also to a lookout which you can gives you the chance to see them from the side which I must say is incredible.

I can imagine the atmosphere would be a lot different in the summer months as more of the attractions would be open, there would be a lot more people and it would give you a totally different view to what it does in the snow but really Niagara Falls is pretty amazing to see at any time of the year. Warm clothing is a must, plenty of it, if you think England can be cold you have no idea what’s going to hit you, don’t let the sun fool you. In a way the winter is a good time to go and visit because it isn’t as crowded, there isn’t many people around and it makes you appreciate it more, plus everywhere looks so pretty in the snow. 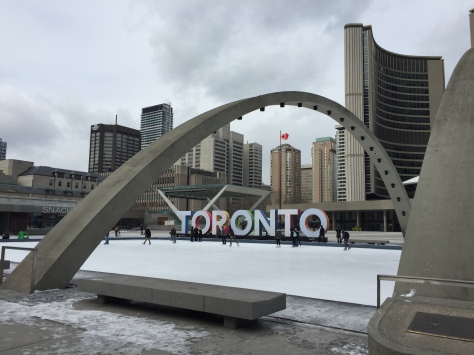 It’s true when they say Canadians are the nicest people you can meet, they really are. Don’t be afraid to go and have a chat to someone when you’re out and about especially if you’re travelling alone, having someone to talk to can make you feel more comfortable and you could also get a lot of advice from the locals of what to do and where to go which can be very helpful. I was walking through a neighbourhood on my way to Walmart when I walked past this old couple shovelling snow outside their house when they said good morning, I replied and they asked if it was an Australian accent I had, I corrected them saying I was English and led to a long conversation and them inviting me in for some afternoon tea (because they knew we had a lot of that over here which I found quite amusing) and they wanted to make me feel at home.

Toronto is roughly a 2 hour drive from the Niagara region but there are some good coach companies which have trips to and from the city several times a day for a very reasonable price so it’s definitely worth it. Like and city there is something that makes it unique and for Toronto it’s the CN Tower and the view from the top is incredible. On a clear day you can even see as far as Niagara Falls from the Skypod (the highest viewing point in the building).  There is also a glass floor on the Observation Deck if you dare to stand on it which of course I did. It was very easy to find my way around as most of the streets are in grid form like New York. There’s not a lot I can say on Toronto because I was only there for a day but I would definitely give it a visit and I would love to go back and explore it a bit more. 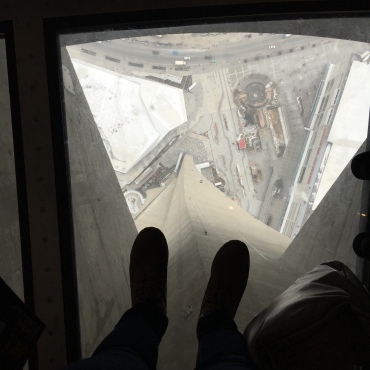 If Niagara Falls is not on your list of places to visit it definitely should be!If you’re travelling with children it would be better to visit in the summer time simply because all of the attractions are open, the most popular being The Maid of the Mist boat tour which I am planning to do at some point when I go back.

One thought on “My Week in Ontario”