If you’re heading for the town of Cody make sure you pack your hat and boots as you’re heading into serious cowboy country!
Up and down the main street of the town you can’t go even two or three doors without passing a souvenir, cowboy hat or boot store. Everywhere you turn there is something making you want to say yee-haw!

Luckily I’d gone prepared with my jeans, checked shirt and cowboy hat which I’d bought in a previous place. The trend here isn’t cheap and a hat will knock you back at least $35. One thing I was desperate to get was a pair of cowboy boots however I instantly backed out of getting some when I saw that a pair was going to cost me more than $100. If you’re wanting to go full on cowboy/cowgirl either go prepared or be willing to make a serious dent in your bank account because fitting in here isn’t cheap! 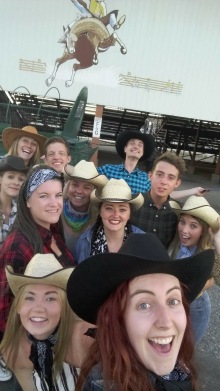 The main event that Cody is known for is the Rodeo; it’s one of the biggest in the country and during the period in which it runs, the town is bursting with merchandise and Americans from across the country. I had never been to a rodeo before so wasn’t really sure what to expect, but it was one of the most entertaining yet weirdest events I’d ever been given the pleasure of going to. 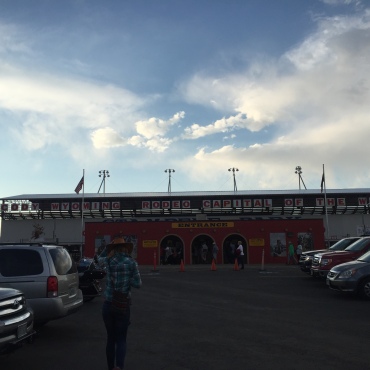 When it began all I was thinking was you cannot get any more American than this! Seriously. The flags came out, the cavalry were marching around the arena, the national anthem being sung by every single person all with hats in hands and hands on hearts. You could say it was an honour to be there and a chance to pretend you’re an American.

There were several events that took place;
– The main event that everyone associates with a rodeo, the cowboys riding bulls that try to throw them off. There were a lot of gasps and cheers during this but surprisingly no major injuries. I didn’t realise how dangerous this was until I saw it with my own eyes. Them cowboys have got some serious guts and strength, it’s nothing like fake bull rides you get in the clubs!

– The other main part was the cowboys riding out on horses with ropes in hand, chasing little calves and having to tie them up before they reached the other side of the arena. They were scored based on the speed they managed to do it. What amused me was the Americans would clap and cheer when the calves got caught but us Brits would do this when the calves managed to get away. Something I wasn’t expecting to see was during an interval, all of the calves were let out to run around the arena and all children under the age of 16 were let in to chase them around and try to catch them. If they succeeded they would win a prize. All I could think was those poor animals have no idea what is going on but clearly it’s a tradition here. 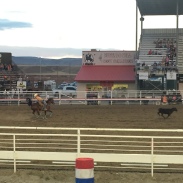 The atmosphere was just incredible, all the cheering and singing, all the drunks and party people and of course the clowns running the show (actual clowns).
Cody is such a small place but when the rodeo is in town, it sees it’s most busiest time of the year and you don’t want to miss it! I also believe the tradition must be to go straight to McDonald’s when it’s finished each night because that’s where the whole town seemed to be when we got there but the staff were well prepared like they were waiting for the storm of people to hit. 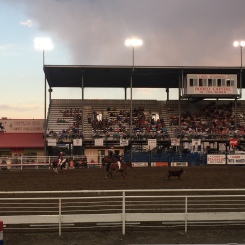 Something I learnt while here was not much seems to happen; in fact we saw, and were told, that if the fire brigade were called out for something, not one, but every single fire truck would turn up to the scene as there was nothing else to do, the same for the cops. At least they’re trying to make themselves useful!
If you’re a big cowboy fan, Cody is the place to be, but even if you’re not, I would definitely recommend going to the Rodeo if you’re in the area, it’s something worth seeing as you won’t understand the fascination until you’ve seen it with your own eyes.